Design Museum Den Bosch invited the American craft specialist Glenn Adamson to come up with an exhibition concept for The Ghosts of Sunday Morning that would reflect on the history of the EKWC. He responded by selecting thirty works from the centre’s history, which were then interpreted and reproduced by the EKWC’s experts as ‘ghosts’: a new version of the original work in precisely twenty-five kilograms of unglazed white ceramic. Adamson has chosen works that explicitly address the tension between transience and eternity, such as the impressions in clay that Canan Dagdelen and the duo Stephanie Davidson and Katie Ewald made of their bodies. Work by Anish Kapoor, Tim Breukers, Tony Cragg, Johan Creten, Babs Haenen and Andrew Lord has also been ‘ghosted’ in this way.

The Ghosts of Sunday Morning enables Design Museum Den Bosch to explore the connections between design and art and the phenomenon of collecting. The exhibition highlights the tension between authenticity and reproduction, original and duplicate, artist/maker and designer/fabricator, craft and art. The value of contemporary art is frequently embodied in a single, unique piece crafted by the artist’s own hands. With design, by contrast, success often lies in the potential for large-scale production: rather than the fingerprints of the maker, it is supposed to display the flawless execution of the factory or fabricator. The works featured in The Ghosts of Sunday Morning have been interpreted and reproduced in spectral fashion by the expert advisers at the EKWC. The artist’s original, unique work is visible only in a picture on the wall. In this way, the ceramic phantoms in the exhibition allow past and present, art and design, maker and artist to collide and overlap. 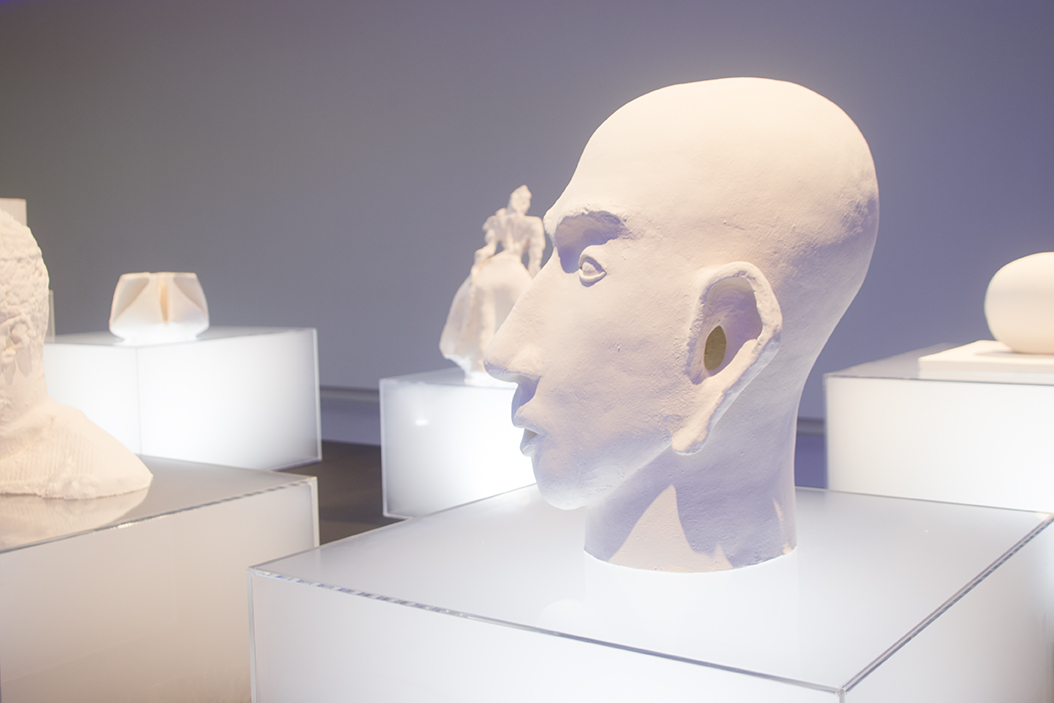 The exhibition was designed by the young Amsterdam firm Trapped in Suburbia with spectacular results: the ghostly white pieces are displayed on perspex stands filled with slowly moving clouds of smoke. As visitors move around the exhibition, the stands slowly light up, and the experience is completed by an enigmatic soundscape formed by the delicately tinkling sound of clay cooling down after firing in the kiln.

This exhibition is made possible thanks to contributions from the Stimuleringsfonds Creatieve Industrie and the Prins Bernhard Cultuurfonds – Noord-Brabant.